It was 105 a few minutes ago… And yes, the thermometer is in the shade.

High pressure system joined us and shifted the jet stream so we are having a warm weather spell. I have a/c in several rooms (normally don’t need them at all) so I’m ok for cool, but my head has been splitting open due to the high pressure.

It isn’t a migraine, I haven’t had one of those for a while, but my eyeballs were trying to go out the front of my head to escape my sinus cavity and looking at anything just hurt, so I napped and napped and napped.
Got zero accomplished. There goes the weekend.

Oh well. Its too hot to run around or anything anyway.

I’ve moved my base of operations to the bedroom for now, it has the most options for comfy and is a smaller room to cool. Hooray for laptops! The kittens are in and out of the room when they feel like it and so all seems to be ok for now.

In between working bouts I plan to tidy up the bedroom, do laundry and fill another box for garage sale stuff. I still sweat my brains out moving around so they shall be small breaks. My house is messy, mostly half done cleaning that I start on and then get overheated or my headache just said “no” to… bother.

This has been my view for the last 3 days. I wake up covered in cat toys from Moon Pie wanting to play fetch and not being able to wake me :) Poor kitteh.

The thing about inheriting Tex’s iPad is that I find echoes of him here and there. This was from 1 year ago in the hospital (just before the really bad days hit) and he was setting up iMessage.
He was rocking the epic crazy hair then and shaving was an infrequent occurrence… 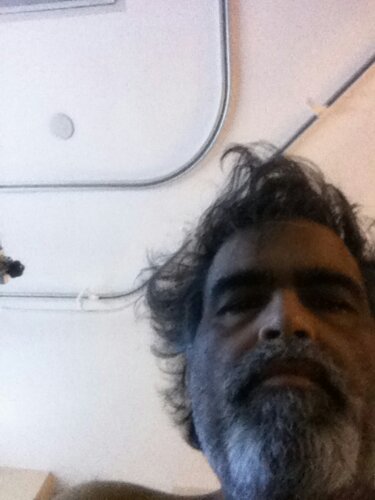 Now that I have more time on my hands, I’m working to do a couple of things.

2. Survive until my next adventure

I’m not necessarily whining about being lonely, but I thought I was a self-sufficient little critter until I had the luxury of having my love/best friend/running buddy with me all-the-damn-time… and then not; and then realized just how very much I miss it and still need that. Not just anyone can fill that position, I’m not just looking for a 1:1 replacement. But still… I feel the absence keenly.

So, I look forward to being with my favorite people now and get a little verklempt when something falls through.

Dealing with the year is kind of a daunting prospect. Normally at (former) work, we’d be fully into hell by now, I would have some sort of birthday adventure planned, holidays that take up the end of the year would be sorted out mostly and I would have to plan for organizing things for Tex as well as myself.

Now the year is largely unimagined. The shocking blur of March through May is still leaving me reeling and I haven’t decided if I want to ponder things on a deeper level regarding AUG-DEC or not. I have a semi-arbitrary deadline for myself of June/July of next year for various and sundry reasons, but those, too are being put on a back burner for now.

Being here now is lots of work.

According to Live Science, Sunday’s supermoon will reach its peak fullness at 7:32 a.m. EDT. EarthKy.org gives the time of peak fullness at different US time zones: 7:32 a.m. EDT, 6:32 a.m. CDT, 5:32 a.m. MDT and 4:32 a.m. PDT. A supermoon is the coincidence of a full moon with the closest approach of the Moon to Earth on its elliptic orbit. The incident results in a relatively large apparent size of the Moon’s disk as seen by observers on Earth. Precisely, it is the full moon observed within 12 hours of the lunar perigee, that is, the point in the Moon’s elliptic orbit which brings it closest to the Earth. At its closest approach to the Earth (perigee), the Moon is at a distance of about 225,622 miles or 363,104 kilometers, and 252,088 miles or 405, 696 kilometers from the Earth at its farthest, or apogee.
Read more: http://www.digitaljournal.com/article/352804#ixzz2Wye6TnDD